When you look at a traditional cowboy spur, worn by the American cowboys, you have to remember, it was not something that was created in the US - it was actually Spanish Cowboy Spurs made by the Spanish back in the late 16th century.

The spur was brought to "The New World" by the Spanish and became very common place in South America, eventually filtering up into the US as business grew and cattle were bought and sold on larger scales.

The "Vaqueros" (Spanish for cowboys or herders)  moved their cattle into the Southwest of America and brought with them their spurs, helping to steer their horses, guide their cattle and free their hands up for signalling and riding.

The American cowboy or boot spur you know today was originally introduced to the United States by Hernando Cortez, a Spanish Conquistador.  He introduced the "Espuela Grande" a type of spur with a drooping shank, narrower heel bands and large multi-pointed rowels, which could be up to 10 inches in diameter. 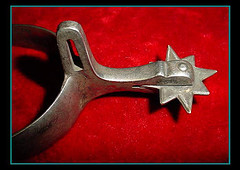 At that time, in the early 1500s, the design of the boot spur was slightly different to the ones you see today. The Rowel was larger for one and also the metals and materials used to make the spurs were less durable and prone to breakage.

These original style spurs eventually changed to a more "traditional" look, with a smaller rowel and shorter shanks - however, this did take around 100 years to happen.

It was around this time that the Spanish Cowboy Spurs became more elaborately designed, featuring inlays of silver, semi-precious stones and even gold.  However, it was only the richer wearers that could afford such luxiurious embelishments.  It was more common for Spanish and Mexican herdsmen to wear very basic spurs.  This was also partly due to the location these cowboys lived; less populated areas have less raw materials to work with a less access to blacksmiths and artisans to make such items.

However, these intricate decorations were also prone to be broken quite easily, especially around the shank area, which was most likely to be damaged.  Because of this problem, the spur makers of that time introduced the first version of what would become known as a "chap guard" or "buck hook" which helped to keep these decorations intact.

These guards were also fashioned in the form of small animals, or flowers to add to the decoration of the spur.

Spanish Cowboy Spurs Design - what to look for when collecting.

The hallmarks of an antique Spanish Spur design are as follows:

As the designs changed over the years and the influence of other cultures became more recognised, the Spanish spur style chaged: