Pascal Moreland Kelly was the maker of another of the most famous sets of Cowboy Spurs.

After Kelly auctioned of his first ever pair of cowboy spurs in Beaver County in 1903, they have been highly sought after items. He was able to make 2 pairs of spurs in a day and sell them for $4 a pair which was four times the wage of a local cowhand.

After some time traveling Pascal set up business with his 2 brothers and forged the Kelly Brothers company.

Often designing custom made spurs and naming them after local rodeo stars or cowboys, patterns such as Booger Red and Toots Mansfield were made. Kelly also offered a slightly cheaper line of spur products and stamped them with the word RODEO.

In 1965 the Kelly Brothers company was sold to Jim Rendale. By that time the Kelly company was producing over $100k of sales a year. Jim Renalde has already bought the Crockett Spurs business and was looking to grow his empire, so selling to him was a logical step for the aging Pascal. Renalde Spurs, encompassing the Crockett and Kelly spurs companies are very collectible items.

In 2008, one of his pairs of silver-mounted, silver and copper overlay spurs with a rare Diamond Dick Pattern sold for $28,000! They belonged to 80 year old Buster Welch. 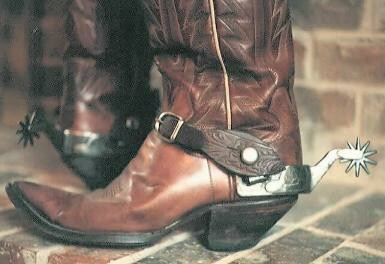 Antique Kelly Cowboy Spurs are always marked using one of the following stamps:

The stamp is usually located towards the end of the band under the buttons. The manufacture and design of these spurs is something that the Kelly Brothers are famous for in the American west.