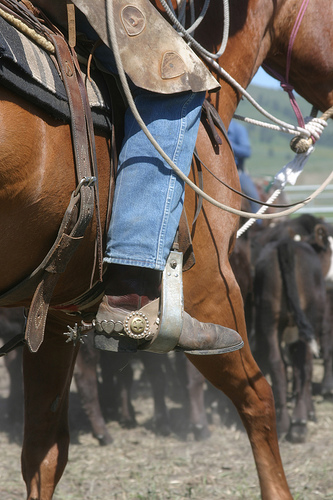 He can be considered to be a good businessman too, as he fulfilled the need of creating many different types of spurs and also aggressively patenting his brands/logos and designs.  What ever type or style was needed, Buermann was the first to step up and create them.

August Buermann was born in Germany in 1842 but later traveled to the US after taking his apprenticeship in lock smithing.

After joining the army as a substitute at the age of 22 he began making spurs for the civilian and military. Buermann fashioned the now infamous StarBrand that adorn his designs and creations.  The company had grown to have over 100 employees before the turn of the century.

By the early 1900s, the majority of military men were wearing Augusts heel spurs and army officers were also entitled to wear heel chains and were all privately purchased from Buermann.

August also had a son, August Jr, who succeeded him in running the company when he retired in 1896.  August Jr was also a good businessman like his father but, in 1914 the Buermann name and design was purchased by North and Judd, a large established hardware company. The infamous StarBrand of the Buermann boot spur was no more and was replaced by the North and Judd anchor mark.

The Buermann name is not without some (slight) controversy too though.  Once the other well known manufacturers started to gain in-roads on the established business, selling new styles of spurs that were popular, Buermann was accused of making straight copies of these designs.  Even to the point where he was accused of taking copies of the images from other companies catalogs for his own use.

At that time, the company was seen to be becoming more and more removed from it's customer, branching out and modernizing at a fast rate.  Other companies such as McChesney or Crockett were closer to their customers and Buermann was playing catch-up.

Like many other spur makers, the majority of these spurs are made from solid brass or iron.  However, Buermann also invented 2 types of metal for use too, known as "Star Steel Silver" and "Hercules Bronze".

Where these metals were used, the metal name was also stamped onto each piece.

In fact, so good were the products that were being made in his modern factory in Jelliff Avenue, that he was able to win some awards of excellence.  The Centenial Commission of Philadelphia bestowed several awards for different products in several categories and the Star Brand also won awards at the St Louis Fair in 1904.

This style of spur is usually stamped with the StarBrand behind the strap lug.

However the hand-forged spurs and equipment are also marked with an image of an Arm and Hammer.

Hand made custom spurs designed by Buermann was also stamped with the letters B A inside the yoke or heel band.  These spurs also feature PATENTED or PAT'D and sometimes FORGED STEEL too.